The only thing we have to fear is statuary

Indy is (knock on wood) not a very fearful dog. He loves everyone he meets, from dogs to humans to mean-ass cats. In fact, even when this rotten little terrier on our walk route named Frederick snarled and fake-lunged at his throat, Indy danced around for the next fifteen minutes like he'd just found his new best friend. Not easily fazed, this one.

So you can imagine our shock when one day in early Fall, MB and I were walking Indy along the riverfront and he totally lost his shit. Our local United Way chapter does a charity thing each Summer where local groups or artists decorate fiberglass animal statues, which are displayed all season and then auctioned off. It's basically Cows on Parade, except we've never had actual cows. Several times they did carousel horses, and this year it was a weird mix of lions, tigers, frogs, and elephants. Anyway, Indy walked past light posts and fences and people on rollerblades and people on bicycles and other dogs and picnic tables, and then as we passed the first statue in the line, a life-sized lion, he darted off to the side. And I mean all four feet popping off the ground, horizontal hover, vacated the area.

Initially we thought that he'd been startled by a loud truck that had driven by just as we came upon the lion, but we soon realized it was the lion itself that had him freaked out. We tried to reassure him that the lion was fake. I walked over and touched the lion. I stood next to it and called him. Indy said, "Are you kidding me? No thanks." He stood at the very end of his leash, tail tucked (for the first time since we met him), very carefully and seriously not looking at the lion. MB tried firmly commanding Indy to walk with him over to the lion. Indy didn't look at the lion more intensely. MB tried snapping Indy's leash a little to get his attention, and Indy actually made a growly snarly "Oh, hell no" noise at us.

Completely befuddled, we hustled him onward, hoping he'd calm down and enjoy the rest of the outing. We passed a giant frog. No reaction. We passed a smallish elephant. No reaction. We drew near to a tiger. Freakout. There was something about the cat-shaped sculptures that totally blew his mind. We threw around theories. Did he recognize that they were quadrupedal and animal-shaped and think they were real? Did he realize they were animal-shaped but eerily not real? (My mom later said he was probably thinking, "Oh, shit! I didn't think they made Kitters-es that big!")


I had actually nearly forgotten about the Lion Incident until yesterday night. We were sitting on the couch, Indy between us, and MB said, "Oh, yeah. Turns out there's another thing Indy's afraid of. Bush animals."

I said, "Bush animals?" while thinking that Indy never seems afraid of animals in bushes when I walk him. In fact, he usually seems pretty intent on diving into the bushes after said animals. "Yeah," MB replied. "Bush animals."

"Like, animals in bushes?" I attempted to clarify. "No," MB said. "Bushes cut into the shapes of animals."

"What's a topiary?" MB said in a total WTF tone.

"Uh. Bushes cut into the shapes of animals."

Apparently someone in the neighborhood has put out some kind of fake topiaries for the holidays, and upon seeing them, Indy had a Jesus Christ it's a lion moment. I guess if we ever need to get back at him for something, we can strategically hide topiaries around the house. OMG it's a reindeer, get in the car!! 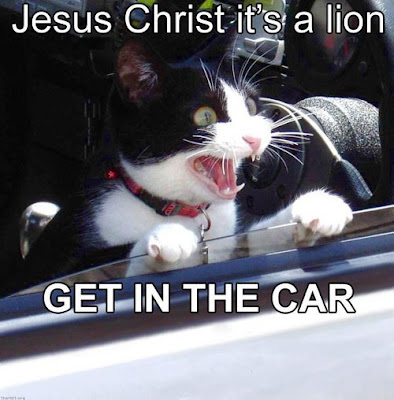 Posted by velocibadgergirl at 11:07 PM

Email ThisBlogThis!Share to TwitterShare to FacebookShare to Pinterest
Labels: we named the dog Indiana