Nico has been at a low but constant level of wheeziness for a month or two now. He has a prescription for a nebulizer that he can use every night if needed, which usually keeps him on track. This past Saturday, though, he just stayed wheezy despite his meds. After treating him at 8 PM, 1 AM, 6 AM, and at 9 AM Sunday, I called the weekend clinic to get him an appointment and figured it would be like the several lung-related appointments we've had since his initial probably wasn't actually croup episode back in April. I decided we weren't leaving without someone saying definitively, "this is asthma, and here are your management options." I understand why his pediatrician was hesitant to pull the trigger on an asthma diagnosis after his first episode, but this was at least our third trip since then to get a steroid prescription, so it was time to make it official. By our 11:30 appointment Nico was wheezing again and his oxygen level was only 91 at check-in. The on-call doctor listened to him breathe, sent a nurse to nebulize him again, listened to him breathe once more and then sent us to check in at the hospital next door. So, that was a bit of a surprise. I even asked if we should go home and pack a bag first and he said no, not really. Oh. Well.

I still wasn't really sure how serious things were. Nico was much better than at Easter, quite chipper really. But by 4 PM he'd had two steroid / albuterol breathing treatments and was wearing an oximeter taped to his toe. He kept dropping below 90 even after the treatments, so they put him on an oxygen cannula. I am glad beyond measure that I didn't wait until Monday to call for an appointment. He was in the hospital for three nights. We really thought we'd get to bring him home yesterday - even his doctor was almost certain - but his level dropped to 85 when he fell asleep for a nap, so he had to stay one more night. He was a complete trooper through it all and wasn't too uncomfortable thanks to prompt treatment and care. It wasn't easy, though, to leave him there with MB each night and come home to be with Elliott. Of course, while I was at the hospital with Nico, I was feeling guilty about the long hours Elliott was spending at my parents' house. An unexpected two-child problem! For his part, Elliott was also an absolute trooper despite total upheaval of our normal routine. 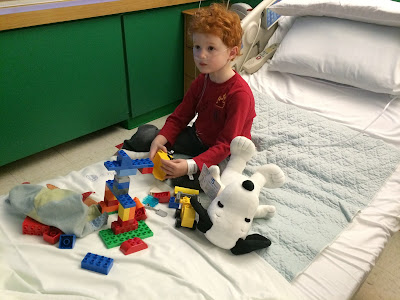 Nico was amazing during his hospital stay. He was mostly well-behaved, quite polite, and pretty patient. At one point, unprompted, he told his nurse, "Thank you for taking care of me!" He logged quite a bit of time watching Pooh DVDs. The first day we were there, ABC Family was on the tv in the room and they were showing a Muppet movie marathon. I'm not sure if Nico had ever seen the Muppets before, but after back-to-back viewings of Muppets' Treasure Island, The Muppets Take Manhattan, and The Muppet Movie, he seems a solid Kermit fan (I approve). He requested the Muppets several times during subsequent days, and luckily the pediatrics floor had a DVD of The Muppet Movie in their collection. Nico also got lots of mileage out of his Duplo my first construction site set, which I ordered for him when it was briefly in stock on Amazon on Christmas Eve. I had planned to save it for his birthday, but I couldn't think of a better cooped-up-in-bed toy, so MB brought it on the first day and he played with it through his whole stay. The pediatrics floor also had a playroom that they told us he'd be able to visit once he was off his oxygen, but the second day his nurse got him a portable oxygen tank so he could go down and play for an hour. I arrived to find him happily scooting around on a tricycle while MB dutifully trailed behind with the tank. (I fully recommend this method for affirming that you absolutely fell in love with and married the right person, by the way.) I think that nurse will always have a spot on my list of favorite people, just for how much fun Nico had that morning. 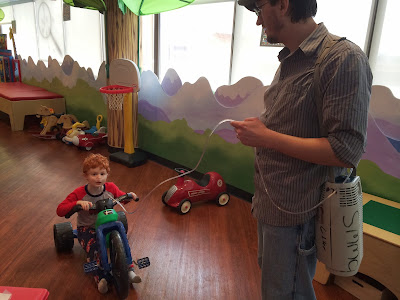 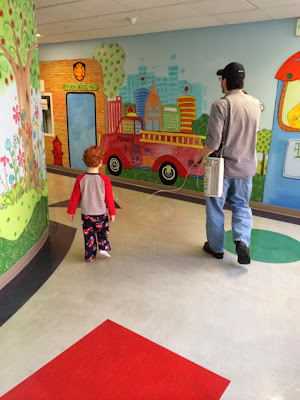 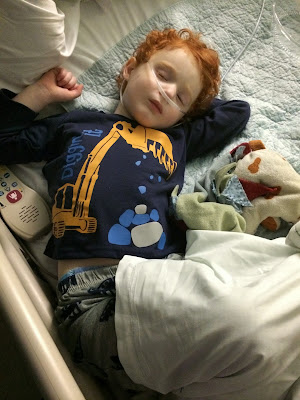 Monday afternoon nap. This one gives me Feelings.

I think I held it together pretty well overall. Mostly I felt grateful that Nico wasn't horribly sick and that his stay would certainly be a short one. The first night away from him wasn't too bad. I was sad about leaving him, but I still figured there was a chance it would only be for one night. I did have a good solid sad feeling once I was sitting at home in the quiet house with no Nico tucked in upstairs. At that point we thought he'd be staying Tuesday night, because the hospital doctor had warned us that asthma patients usually have to be off of supplemental oxygen for 24 hours before they can leave. But just one more night, we can do it! Maybe he'll improve really fast and get to come home early! The second night wasn't too bad because it was supposed to be his last night. I just had to get through it! The unexpected third night was the worst, compounded because Nico himself had a really hard evening after I left. He'd felt better that whole day and played a lot, off his oxygen. Then he'd only had a short, aborted nap attempt. So once I left he had two meltdowns and behaved very badly for his evening nurse. When we face-timed at bedtime he was so sad and droopy...it was awful. After that I had such a bad case of the sads myself. Even though I knew he was going to be okay, I felt very Eeyore about things.

But today, as promised, he got to leave the hospital. There was a happy Elliott / Nico reunion with lots of head rubbing and hugging. When Nico left the room, Elliott dropped the toy he was playing with and army-crawled across the house trying to catch up. An unexpected two-child success! He's on four medications (two until he's past this episode, two long-term) and still sounds a little rattly, but he is home. It feels pretty awesome to have my whole family under one roof again, really and truly. 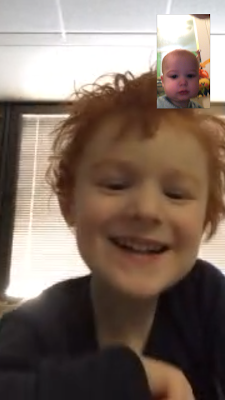 cannula-free and face-timing his brother on Tuesday morning...possibly one of the cutest moments of their brotherhood to date 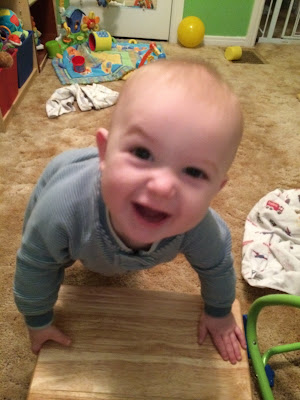 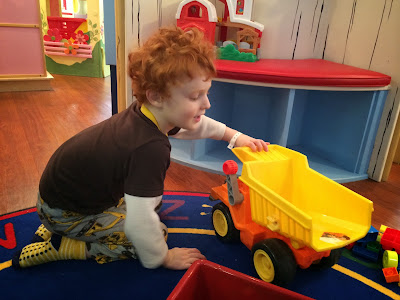 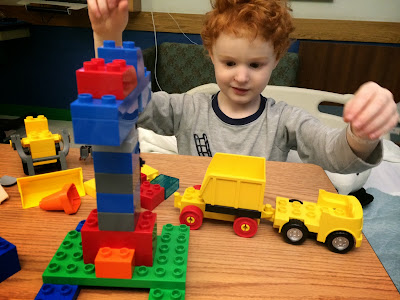 with his fantastic new Duplo set 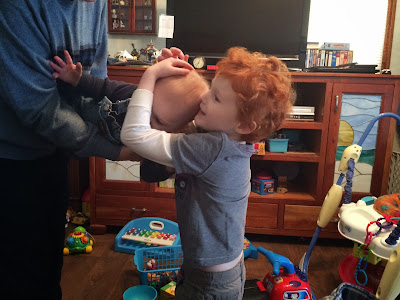 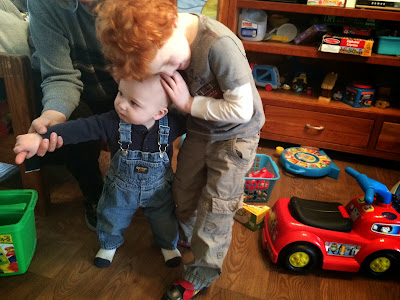 Posted by velocibadgergirl at 11:48 PM