Stocking posts are always fun to read and put together, so here's mine for this year. Santa usually brings a game or two and books to share, so here are this year's: 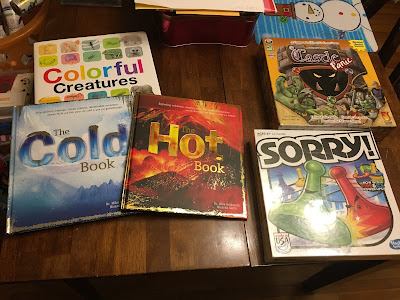 Nico asked for Sorry in a letter he wrote to Santa, after playing it at his great-grandmother's when we visited for Thanksgiving. We didn't have any particular favorite picture books this year, so I settled for the hot / cold books. I'm a little torn on the colorful creatures book. I really like the graphics - big pages of a bunch of photographs of animals in each color - but I'm not sure the kids will ever look at it. I still have the receipt, so I may return it. Or not. I don't know. 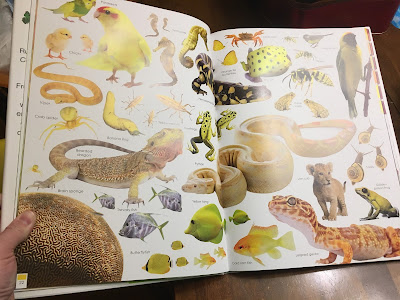 For Nico: a Captain America matchbox thingie, two packages of mini chess cookies, a Paw Patrol bath pouf, reindeer socks, two pairs of fuzzy socks (which he requests from Santa every year, to my delight), a dolphin tree ornament (he has liked dolphins since we visited the Shedd Aquarium back in May), Christmas themed underpants, a Paw Patrol learn to tie shoes book, Lego reindeer set, Rudolph bandaids, and a journal (because he told me he was planning to ask Santa for a journal this year also). After some overwhelming googling, a search at Barnes & Noble to learn what I didn't want, and some more refined googling, I chose Q & A Every Day for Kids. I hope Nico likes it, because I think it's pretty cool. 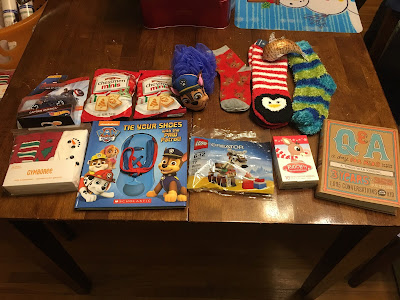 For Elliott: Captain America matchbox thingie, cookies, bath pouf, socks, a whale tree ornament, underpants (a moment of silence for the naive optimism I had last Christmas when I ordered these, thinking surely my child would certainly be potty trained at ALMOST FOUR YEARS OLD WEEEEEEEEP), Paw Patrol holiday book, Lego reindeer, bandaids. I may get him a cute blank notebook to scribble in for his own journal. I'm also planning to pick up a cheeping bird for each kid, since that's what Elliott has said he plans to request from Santa. 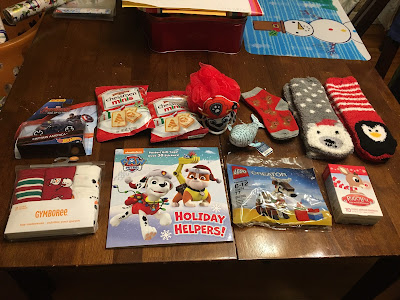 Every year I try to hold my buying in check, and every year I overdo it for the boys. This year I really tried to contain myself. Their birthdays are three weeks and nine weeks after Christmas, plus we are hoping to take two city trips this coming year and I'd much rather have spending money for experiences and souvenirs for them. I have one of these animal carrier / vet kit sets for each kid, which I will wrap up from MB and me. They both love little stuffed dogs and have a bunch. I'm glad I opened this one up for the picture, because the dog that came with it isn't that cute and it's weirdly stiff. I think I will try to find cuter / softer puppies to put in the carriers, or just let them use the multitude of puppies they already own. I also want to find some kind of pouch or bag for them to keep the medical stuff in, so that it's not always banging around in the carrier where the puppies are supposed to hang out. 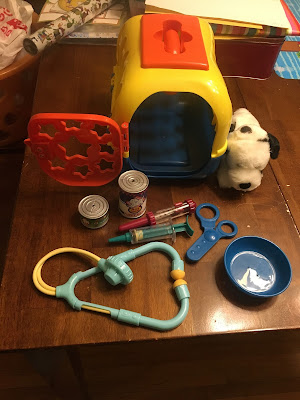 I think I will also wrap up a Lego City set for each kid - I have several nice ones I've bought on clearance here and there, so that should be easy as long as I don't forget.

Did anyone else do a stocking / gift post this year?

Playing:  Hamilton. On their own the kids have started requesting my favorite tracks. I'm very proud!
Posted by velocibadgergirl at 11:33 PM