It feels very strange to not blog every day or every other day. (Thanks, NaBloPoMo, for warping my standards forever.)

I spent Friday evening helping Brownie Girl Scouts paint T-shirts for their Art to Wear patch. Since the workshop was at the nature preserve, they got to use animal track and leaf stamps to decorate their shirts. One girl wrote, "I was trampled by animals!" at the bottom of her track-covered garment. Another used only leaves in brown paint. She was very meticulous, and her shirt looked wonderful. She concocted a story about walking through the woods, only to come upon a vicious leaf pile that opened up like a mouth, swallowed her whole, and then spit her out again when she didn't taste so good. Shades of Calvin & Hobbes and the carnivorous leaf pile, yes? I loved it.

At the end of the night, I was more or less adopted by two tiny girls who wanted me to be their guardian for the campfire. One of the girls was afraid of the dark, afraid of fire, didn't like hot chocolate, didn't like marshmallows, and was afraid a vampire would get her. I convinced her to eat her S'more with no marshmallow (she admitted it was good), drink lemonade instead of hot cocoa (even though the poor little thing shivered so hard she nearly spilled her cup), and walk to the fire ring with me, even though she wouldn't get near enough to feel the warmth. I counted a victory that she went out and seemed to have an okay time, even though we only stayed out for about five minutes before we gave up and went back inside where it was warm. When her dad arrived to pick her up, she told him about meeting the nature preserve's docent barn owl. She may not have liked the campfire, but something tells me she's going to remember the evening's other adventures.

On Saturday night, MB and I hosted the 8th annual Groundhog Day Party, which was concocted by the bibliophile when we started college, and which she and I have traded off hosting every year since. Last year, she did a Hawaiian theme, after we selected a luau themed groundhog photo for our invitation.

We didn't really do a theme, but here's a photo of our featured snack: 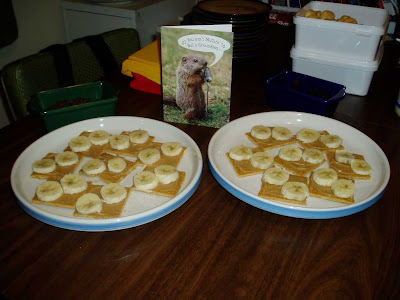 (Immense amounts of cool points to anyone who wasn't at the party who gets the joke.)

It was a smaller crowd than usual, but seemed to be one of the better parties of late. We ate our weights in too-sugary snacks while we played Taboo, Apples to Apples (LOVE!!), Scattergories (highlight:  two teams coming up with the phrase "donkey dong" for two different entries during the same round, completely independent of each other, even though that phrase does not make a regular appearance in anyone's lexicon), and then modified Pictionary. Being a geek fucking rocks, especially when you know lots of other awesome geeks to hang out with. The last partygoers left at 4:30 AM, so MB and I spent most of Sunday sleeping it off. We finally got up around mid-afternoon and ended up going to the grocery to round out our big eventful day. Party animals, that's us.

Reading: Playing the Moldovans at Tennis by Tony Hawks


Just Finished: The Secret Lives of Men and Women, the latest PostSecret book


Playing: Led Zeppelin on shuffle on the mpMonster

Posted by velocibadgergirl at 11:16 PM