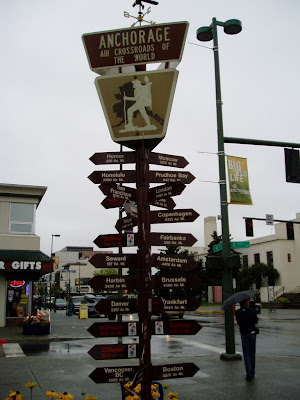 So, the Anchorage trip. It almost started with a big disaster. On Friday the 12th, three days before we were scheduled to leave, I realized I only had a printout of my itinerary, and not my mom's. I'd bought her ticket using my credit card, so I should've received her itinerary in my work email. I called the travel agent that my workplace always uses, and found out that not only did he have the wrong email address on file for me, but our flight had been canceled and we'd been rebooked on a different flight that left three hours earlier. If I hadn't called on a bit of a panicky whim, Mom, my officemate, my officemate's girlfriend, and I would've missed our flight completely. Aiee! New itineraries finally in hand, we returned to our previously scheduled routine of avoiding packing and happily anticipating.

On Monday the 15th, we departed at 2 PM, and arrived in Anchorage (via Chicago) at 2:40 AM, or 11:40 PM Anchorage time. OMFG it was a long flight. We grabbed our luggage, hailed a cab, went straight to the hotel, and went to bed. (And let me just say...the towels may have been disappointingly scratchy at that hotel, but the beds were POSH. I wanted to steal the down comforter off my bed, I loved it so much.) 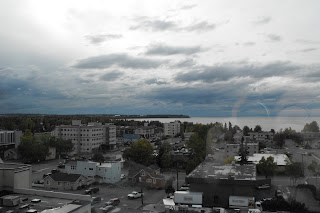 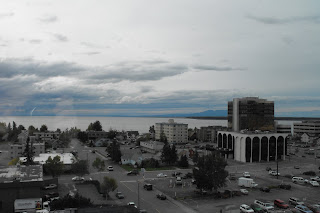 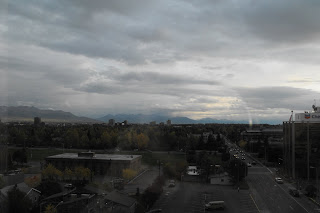 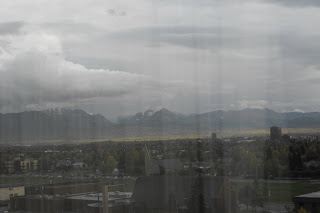 views from our hotel

Since nobody had bothered to forward a meeting itinerary to me or to my officemate, we really had no idea what time we were supposed to meet the rest of our conference peeps the next day. Mom and I went down to the lobby at 8:00 the next morning, and by a stroke of luck ran into two guys I'd met at a previous conference. They informed us that everyone was meeting up at the Snow City Cafe for breakfast, so we got a downtown map from the bellman and moseyed over. And by the way, Downtown Anchorage is a fine example of the way cities should be laid out, with North / South streets assigned letters and East / West streets given numbers. It made navigating easy even for someone as directionally challenged as me.

The Snow City Cafe is a fabulous hippie-ish place, with the Best Pancakes Ever. Mom and I ended up eating there four days out of five, and if you ever find yourself in Anchorage, we can heartily recommend the plain pancakes, blueberry pancakes, and the fruit & yogurt parfait. I'm drooling a little now, thinking about it. 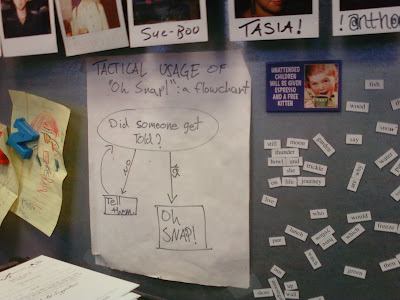 Everybody and their cousin made jokes about me egging Sarah Palin's house before I left (which I would never do, so if the government is reading this, I totally didn't do it), and several people seemed interested in knowing what the political climate was up in Anchorage. It really seemed pretty normal, or at least as balanced as my home (very Red) state. There were several shops with pro-Palin gear, but I also saw at least one with an Obama sticker displayed in the window. 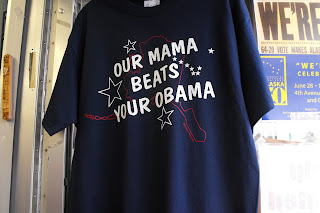 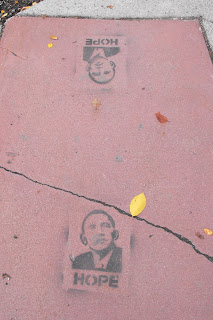 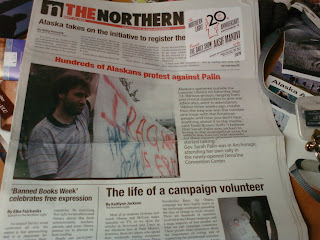 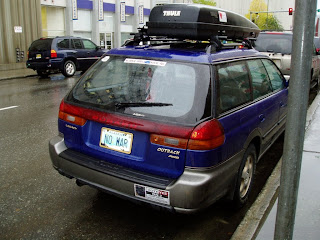 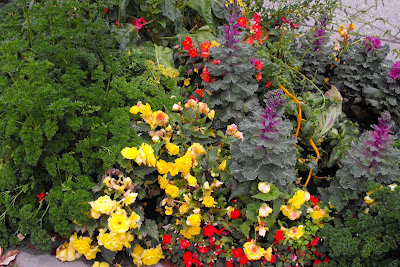 The growing season is very short in Alaska, but during the summer the days are so long and there's so much rain that the plants just go nuts. 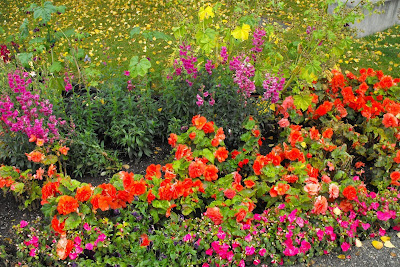 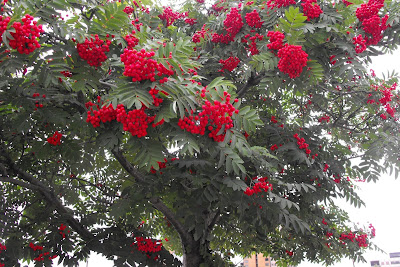 They apparently had a really short, wet, gray Summer this year, and the leaves were just starting to change when we arrived. Usually the leaves have changed and fallen by mid-September, so I felt like we were stealing an extra week of Fall, my favorite season. Vacation with bonus! 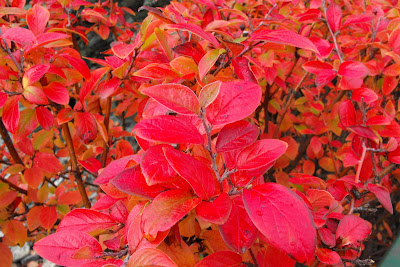 Posted by velocibadgergirl at 11:28 PM

Email ThisBlogThis!Share to TwitterShare to FacebookShare to Pinterest
Labels: Alaska