When I was a little girl, sometimes the fear kept me up at night. Once I read a book about a scary one-eyed tomcat named Mog, and I imagined him lurking beneath my bedroom window as I pulled the covers tight over my head. My fourth grade teacher told us that when a bear kills a person, it often hides the body in the woods and comes back to snack on it later. I have no earthly idea why she thought we needed to know this, but I remember for weeks I had trouble falling asleep. I'd surround myself with stuffed animals -- old friends to defend me against marauders -- and chant to myself, "Don't think about bears, don't think about bears."

I didn't know, then. I didn't know about the real monsters, the real fears. Even now, I pull the covers over my head, I tell myself they're not real. I pull the covers tight, because if I can just keep my head down, the bad things will turn out to be figments of my imagination. And really, don't we all like to pretend that they are? Husbands don't suffer from terrible changes of heart and walk away from their marriages. Wives don't die in childbirth, not anymore. Sometimes you lose a loved one, but it is always someone who has lived a long, full life. Your great-aunt, perhaps. Or your grandfather. It's never supposed to be your mother, when you don't quite feel ready to face the world alone. It's never supposed to be your father, when you are still just a little girl. And it's never, God, never supposed to be your child.

I never knew Maddie Spohr, had never heard her story or seen her face until the news that she'd gone into the hospital hit Twitter. And then, she was gone. I barely knew Thalon Myers. I'd added his mother's blog to my reader a month or two ago, but was really behind on reading through my feeds. And again, it was Twitter that broke the news that he'd been rushed to the hospital. And then, he was gone. I am not a praying person, in general, but my thoughts have certainly been with Maddie and Thalon's families. Think of them, if you can spare a moment, because no one should have to face this kind of monster alone. 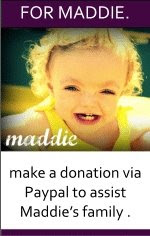 No pressure at all, but imagine what a dollar from
everyone could mean to them right now, as they face
hospital bills and funeral expenses on top of their loss.
Posted by velocibadgergirl at 10:09 PM