You must be new.

MB's company sponsored a free weekend of indoor mini golf for employees and guests, and after our plans to go with friends fell through, we decided to go ahead and take both our kids yesterday afternoon. Yes, you read that right: we took a two-year-old mini golfing. On purpose. It was comically bad. He was SUPER EXCITED to be there, mostly so he could dip his tiny golf club into the unnaturally blue water hazards and run ahead to collect all the golf balls that the rest of us putted. And of course Nico howled with indignation every time Elliott ran over to pick up his ball, and of course Elliott literally kicked and screamed any time one of us picked him up to try to prevent him from interfering. I had to laugh, it was so bad and so obviously inevitable. It was like we had never had a toddler before, or more specifically, like we'd never met this particular toddler before, since I suspect Nico at two would've been much more circumspect about the whole affair. MB ended up striking a truce with Elliott around the 8th hole, when he got Elliott to agree to ride peacefully on his shoulders for the rest of the outing. Even putting one-handed with a 27-pound monkey perched on his back, MB still kind of kicked my ass. He even got two holes-in-one in a row. So it all turned out okay in the end but seriously. Are we new at this? 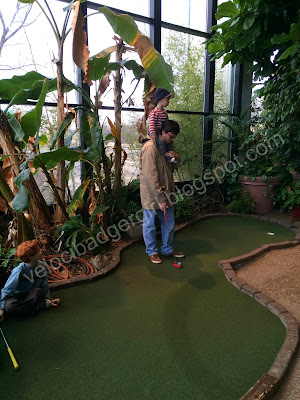 In other we're not so bright news, we were almost taken by surprise by the weather event of the season, since we don't watch the news and I hadn't checked the forecast all weekend. I finally saw someone talking about snow in Tennessee on twitter, so I checked and we were predicted to get 5 - 8 inches overnight Sunday into Monday. That would've been one hell of a surprise to wake up to this morning! We ended up with an official total of 5 1/4" which was enough to close the schools for the day. Since I was off today anyway, I spent the entire day at home with the kids. It went well, especially considering we almost never just stay home for a whole day. We usually have an outing or at least an errand. The schools are closed again tomorrow since there are concerns it will all freeze over tonight, so I may stay home with them again. I figure I'll wait and see if anyone else decides to brave the unplowed park road into work before I make the trek myself. Nothing of major note happened today, though I did finally capture an excellent Elliott stinkeye for posterity. This is his go-to expression when he's unimpressed or annoyed and I love it so much. 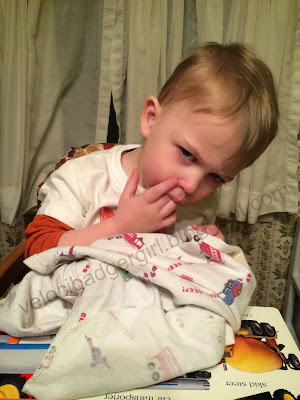 This was after we had the audacity to offer him crackers while his pizza was in the oven. Clearly we are monsters.

Playing:  Car Wheels on a Gravel Road by Lucinda Williams

Posted by velocibadgergirl at 11:12 PM