I've been experiencing an increasing level of distress over what had started to feel like blog abandonment. My life has been eating my writing mojo of late, but the longer I go without trying, the harder it gets to even attempt it. And it's not that things have been bad or even particularly stressful - on the contrary, I'm generally pretty happy. It's probably a combination of things. Work is typically balls-to-the-wall busy, and in a using my brain kind of way, so that when I get home I'm just tired, and often still pondering various work projects. For instance, in the shower the other night instead of planning out a blog post, I was mulling over ideas for a grant we're getting ready to start writing. Not an un-valuable use of my brainspace, certainly, but also not one conducive to journaling about my cute kids. There's also my unofficial but I guess official resolution to do a better job keeping up with the house, which means cleaning after the boys go to bed most nights. Plus I am trying really hard to do some workouts at home in the evenings (Started Betty Rocker this week, and what the fuck, amirite? She's adorable, but what. the fuck. with some of this stuff). I guess this is a long-ass way of saying I seriously don't know how some of y'all do this. Full time jobs, kids, not-disgusting houses, workouts, AND blogging? I don't even sleep much and I can't get it all done.

Anyhoodle, we have been busy around these parts since I last logged on. Nico had two birthday parties, one at home with the extended family on January 17 and one at the nature center with his classmates and playdate friends on January 24. We'd never let him have a classmate party before, but turning five felt significant enough to warrant it. I'm quite glad we said up front that we probably wouldn't do another one until he turns ten, because as great as his party was, it was exhausting. I let Nico choose the animal visitor and he picked a snake, so we did a whole snake theme. It was super simple as far as parties go - we paid for someone to bring in the animal visitors (there were three snakes) and do activities with the kids for half an hour. We served cake shaped like a snake with crackers, string cheese, and grapes and set out little water bottles and juice boxes. The kids were WAY EXCITED to watch Nico open his gifts, and then we gave everyone a super-nostalgic wiggle snake and parted ways. Then we went home and I took a three-hour nap. Birthday success! He also got a birthday club card from the carousel at the mall good for a free ride and a punch balloon for himself and up to nine friends, so we met our playdate crew there the Monday after his party and treated them all. That was super fun, actually. And after that, one of the other moms treated us all to Pump it Up, where my kids were admirably self-sufficient. Of course the birthday experience was more important than the gifts, but Nico got some really spectacular toys. He got several great Lego sets, three big boxes of K'Nex, and a set of snap circuits. I wanted to play with all of it after he went to bed. The snap circuits are really cool, and he's been building with the Legos and K'Nex pretty much daily since his parties. So far, five is pretty fantastic. 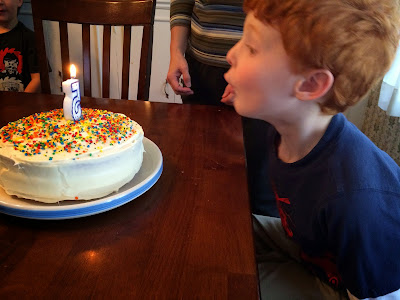 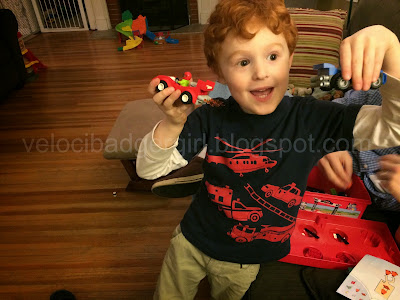 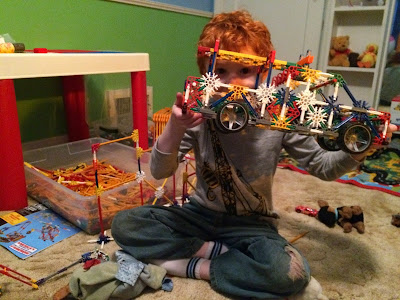 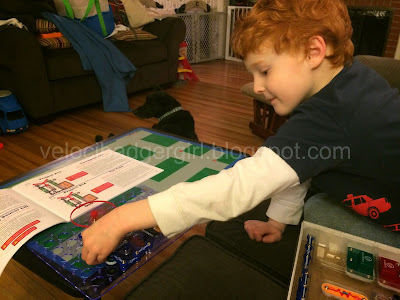 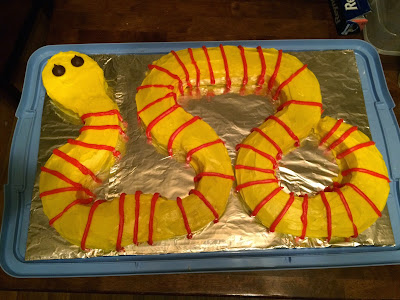 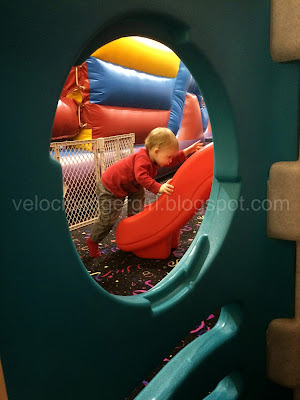 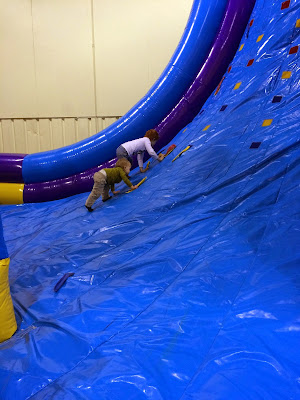 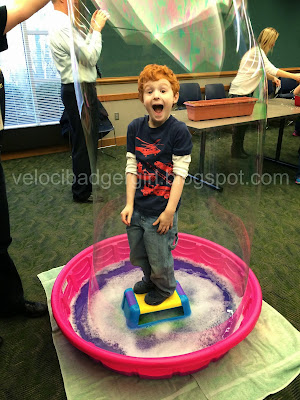 Almost-two is rather fantastic, also. Elliott has had a huge vocabulary explosion in the last two months, and it's the best thing since Nico had his first big language burst. One day E kept saying what pretty clearly sounded like, "Oh no! Shark!" but I didn't think he knew what a shark even was, so I'd repeat back quizzically, "Shark?" and he'd yell "AAAAAH!" It was so weird and hilarious. Turns out there's a very similar conversation in one of his Pooh videos at my mom's house.

We read Bear Snores On every night and he waits with barely-contained anticipation for the page when he gets to name all the characters. I don't know how to adequately describe how much I love this, other than to tell you that if it were possible to get a tattoo of the sound of him saying "badger," I would do it in a heartbeat.

He totes his beloved kangaroo everywhere, as well as whichever receiving blanket is around - he has no real preference on those. He will kiss and hug and "love" his Roo-uh, and sometimes ask me to do the same. Mom told me one day last week that he set Roo on his high chair tray while he was eating and had a long conversation with him. Elliott would lean down and babble to Roo, then tip his ear toward Roo as if listening to him. Then he took Roo's paws and made him sign "more." I wish mightily there was a video of this interaction, but alas. E will also fix little play food snacks for his stuffed toys and play with trucks and the other day at the consignment shop, he got his hands on a wooden leopard while I was trying on jeans and barreled around roaring magnificently. He is our instigator, toy-dumper, risk-taker, and sass-spouter. He's also loving and sweet when he feels like it, and pretty cute on top of it. 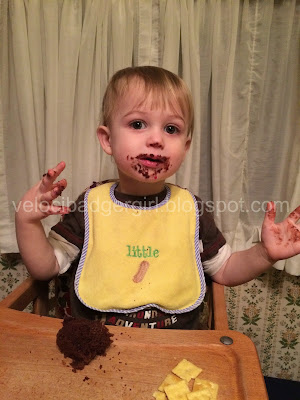 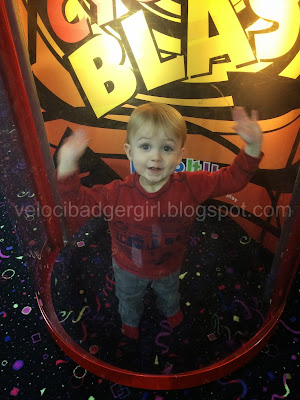 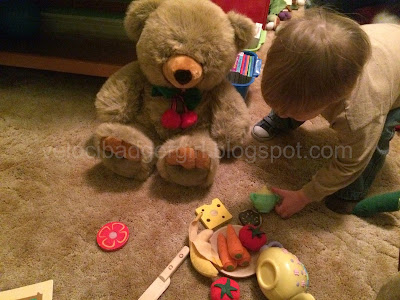 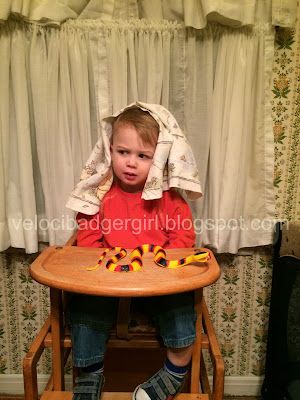 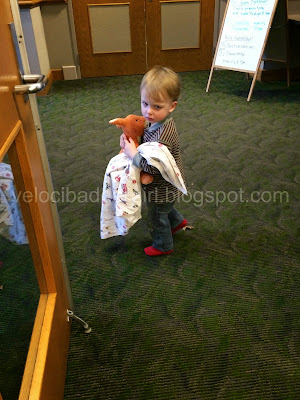 As for me, I have a wisdom tooth coming in and have a newfound sympathy for babies everywhere. Teething is in fact a bunch of bullshit. My fascination with Unfuck Your Habitat continues unabated. I actually re-activated my ancient tumblr account so that I can post before and after pictures on it, so if you are the kind of person who likes looking at other people's decluttering photos (as apparently I am), you can find me and my embarrassing amount of material goods here. This weekend I'm beginning the long-overdue process of liquidating my gigantic CD collection. I am halfway through the first of four huge diaper boxes and I am utterly horrified about the amount of money I spent on CDs in my youth. Kids these days have it easy with their option to download singles for $1.29, man. There's probably more, but after three days of having this in progress, I figure I'd better hit publish before another week goes by. To all of you who are still around, thanks for being here. I appreciate you even more these days, I think.


Reading:  Glory O'Brien's History of the Future by A.S. King

Playing:  Car Wheels on a Gravel Road by Lucinda Williams

Posted by velocibadgergirl at 6:33 PM