I've taken advantage of two weekends mostly at home to start the year by tossing stuff out of this house. First I went through my own dresser and the stuff piled on / around it, and found five medium-sized diaper boxes worth of stuff to throw out, donate, or take to the consignment shop. Today I took the whole day to clean every bit of the kids' rooms. I even moved their beds and dressers so I could dust and vacuum underneath and washed the curtains. Going through their things yielded another diaper box of clothes to sell and a kitchen-size trash bag full of stuff to throw out. I finally repainted Nico's wall where I patched it before Christmas, and then while I had the paint out anyway I put a coat on the nightstand I bought to refinish for Elliott when he was a toddler. I keep finding stuff and more stuff and asking myself "Ugh, how much x does one family need?" and the answer is always "less than this." I'm not really a minimalist and I never got into konmari*, but it does feel nice to start the year with some divesting.

I roped MB into hanging up the corkboard I put together for the boys' state park pins and National Parks junior ranger badges, a print that has needed to be put back up in Elliott's room for at least a year, and a curtain rod so I can put a cute curtain up over Elliott's blackout curtain. He was efficient if not enthusiastic. 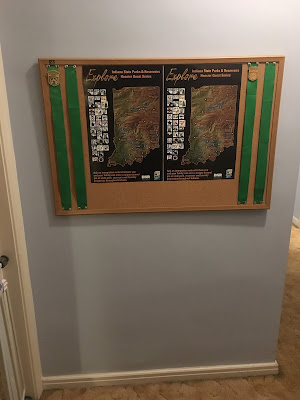 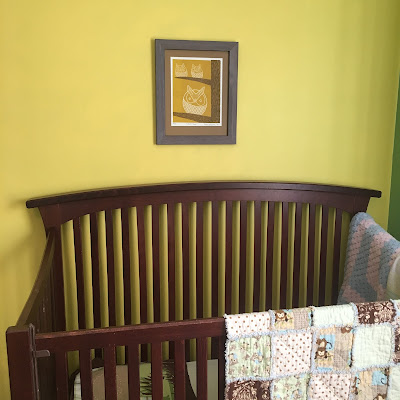 (Yes, Elliott still sleeps in a crib. He can't climb out, and also : last baby.)

On NYE I combined a painting and a frame that I bought on separate occasions at my favorite consignment shop and convinced MB to hang them in the dining room. I love this very much, even though I'm giving up on remembering to take a picture during the day without the lights reflected in the glass. 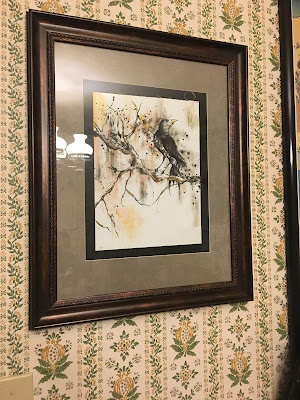 * I did co-opt one konmari thing - I refolded the kids' shirts so that they can see everything. I'm hoping this will result in them wearing more than a rotating three or four of their obscene number of shirts. 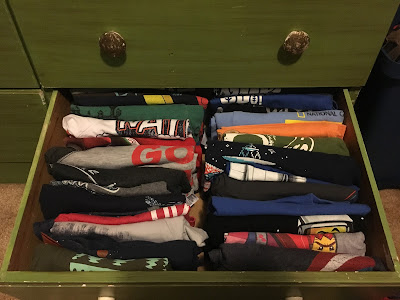 Reading:  Harry Potter and the Sorcerer's Stone. I used to re-read the series every time a new book came out, but then I didn't have time once Order of the Phoenix came out, and now it's been years. A twitter friend is reading them for the first time and tweeting as she goes, and it's utterly charming and inspired me to pick them back up again. It feels like a comfortable cozy blanket to be back in these stories again.