A for participation, D for dancing skills

I just returned from one of the most surreal parties I think I've ever attended. It was a surprise party for one of my favorite teachers from high school. Now, it makes sense in that one of my close friends from high school now teaches at our alma mater and is friends with the birthday teacher and his wife. But still, it was a strange situation. I mean, what do you write on the card? Mr. So-and-so seems too formal, but first name only seems way weird. (I just left the front of the card blank, figuring no one would be confused as to whom it was intended for.)

I went with the teacher friend, evilducky, and the bibliophile, and we dubbed ourselves the Class of '99 Delegation. The teachers who remembered us seemed really excited that we were there, and the birthday teacher seemed pleasantly surprised. As a whole, the party was nowhere near as awkward as I feared it would be. In fact, it kind of comforted me to know that other people's parties are a lot like ours. My group of friends, we were never the "cool crowd" at school, so I think we always worry a little that our party-style is lame, even though it's always been good enough for us. Mostly people just mingled and had snacks, and then birthday teacher and several other teachers who are in a band together started playing a set. They were pretty good, too. Kind of embarrassing that we're all home now and our teachers are still partying, but that's okay.

It's never been hard to see college professors on a more equal, we're-all-adults level, because at least in my classes, the professors more or less presented themselves that way. It wasn't all that unusual to end up at a cookout having a few beers with your geology prof or going to a bar after a reading with the person who taught your fiction workshop. High school, though, was very much a kid / adult thing (as it should be, of course). It was both hilarious and bizarre to party down with people who used to grade my math homework and supervise my gym classes. In a way, I felt like we were in some kind of National Geographic special. "Quietly, now...let us observe the teacher in its natural habitat."

Edited to add: After I uploaded my last post, I realized I wasn't ready to call it a night quite yet. Luckily, the bibliophile was up for some Nintendo. 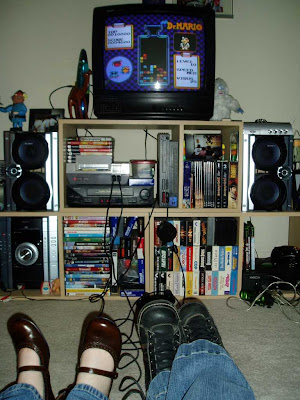 Kickin' it old school after kickin' it with people from our old school.
(alas, the cute shoes aren't mine)

I'm not sure about this forced switch to the new Blogger. I hope it doesn't suck. And now that I have labels, I can't think of a single thing that would neatly encapsulate this entry. Bollocks. Better luck next time, I hope.
Posted by velocibadgergirl at 9:30 PM