Five Facts About Me

I've been tagged by the lovely That Chick Over There to do this Five Facts meme. As far as I can tell, the facts don't have to be weird, they just have to be true and about me.

1. I am a compulsive list-maker. I write everything down. I don't always remember to look at my lists, but I always make them. Anything I don't write down probably isn't going to get done. I even had to make a list to make sure I'd remember to do this entry, and to remind myself what I was planning to put in it. (You also get a bonus fact: I have loopy and somewhat erratic but mostly legible handwriting.) 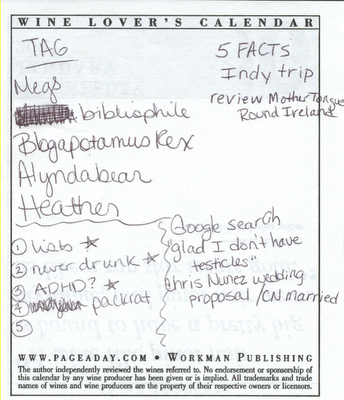 2. I've never been drunk. The few times I've attempted it, I've just ended up dozing off while everyone else got very snockered and shared their deepest darkest secrets. I've concluded that I'm just not one of nature's born drinkers. At least I'm a cheap date!


3. I was diagnosed with ADHD at 12 years old, and have been taking medication for it ever since. While I agree that it may be an overdiagnosed and overmedicated condition in children, I will go to the mat with anyone who tries to tell me that it's not a "real" condition or that no one "needs" to be medicated for it.


4. I am a terrible packrat. I hate to throw things away, because I always think that surely someday I'll have a use for whatever it is I've just decided to keep. I think part of it stems from growing up in a really arts-and-crafts-y household, where you never knew what wacky thing you'd be able to turn into a project somewhere down the line. Part of it undoubtedly also comes from my efforts to minimize what I put into the waste stream. I'm trying to work on this, in the interest of having a less cluttered life. I'll let you know how it goes.


5. I have a deep and abiding love for dinosaurs, which began when I was very small. I don't remember ever not liking them, so I have a feeling I've pretty much been interested in them since I knew they existed. It seems that every kid goes through the dinosaur phase; I just never grew out of mine. I originally planned to go to college to study vertebrate paleontology, and though I have no regrets as to the path my life has taken, I do sometimes wonder if I'd have had a good time digging up dinosaur bones for a living. I always though I was weird until high school, when I met evilducky, who has a similar love for dinos. (She also gets credit for this fact being on the list, since she suggested it when I was stumped for one last thing to add.) Ironically, my favorite dinosaur isn't a dinosaur at all, but the pterosaurs, particularly Pterodactyl and Pteranodon.

Google searches that lead people to this blog usually involve desire for egg salad recipes (sorry about that) or info on the Im in ur such-and-such doing this-and-that phenomenon, but lately I've had a few that are much more entertaining. The standouts, by far, are the ones asking about Chris Nunez's apparent impending marriage proposal (sorry, ladies) and someone who wanted to find out if she was alone in feeling "glad I don't have testicles." Whoever you are, sister, I'm with you. Being a girl rocks. And if you're a guy...well...way to embrace the hand fate has dealt. Go on with your bad self.


"Wacky Web Site" of the day: The Orphanage of Cast-Off Mascots. It's not the greatest page ever, but the rest of the site is worth a browse, especially since it's from the guy responsible for the hilarious Gallery of Regrettable Food.


Fact or Crap Trivia: Fact or Crap...Leonardo da Vinci could bend horseshoes with his bare hands.

Fact: "Well known as the original Renaissance man--inventor, artist, philosopher, chef, and mathematician--Leonardo da Vinci also had less publicized physical talents. He was a master equestrian and enjoyed swimming and fencing, and his great strength enabled him to bend horseshoes with his bare hands and to stop galloping horses by grabbing their reins."

I wonder if he also shot lightning bolts out of his arse.

Posted by velocibadgergirl at 2:41 PM

Email ThisBlogThis!Share to TwitterShare to FacebookShare to Pinterest
Labels: memes