You may have read about Upstairs Neighbor Guy before. He's a big improvement over the previous upstairs neighbor, the trashtastic chick with multiple elephantine children (sound-wise, not size-wise) and umpteen angry boyfriends. He does play his crappy music too loud at least once a week, but usually not for long, and there's that whole constant vacuuming thing, but overall he's a huge improvement. However, he has one incredibly obnoxious habit. He throws objects over the railing of his balcony. Most of the time, they clear our yardlet and fence and land on the lawn behind the building.

Back in December, I documented the appearance of a lampshade on the lawn: 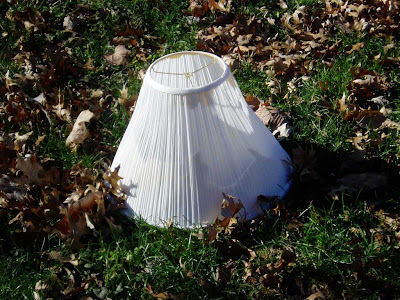 Squirrel kegger gone wrong, or first sign that our neighbor is a freakin' froot loop?


Since the lampshade (and its attendant lamp), most of what I've found in our yardlet and on the lawn have been more ordinary if no less disgusting pieces of litter:  a KFC bucket, two huge pieces of sytrofoam, a broom handle, a large piece of that fake grass carpet that's used to build mini golf courses.

But then, last night / early this morning, around 12:30 or so, I was reading blogs and winding down for the evening when I heard the most godawful clang from the backyard. I flipped on the porch light, but didn't see anything. Figuring he'd definitely pitched something over, I checked again this morning. There's a damn toaster oven lying in pieces on the lawn. Who tosses small appliances over their balcony rail? Sweet cracker sandwich, this neighborhood is weird. 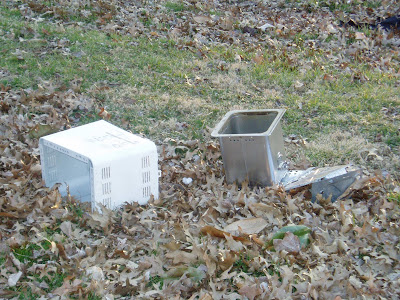 Now, this guy is a known Dumpster Diver. I'm afraid to think what his apartment probably looks like at this point, since I've heard numerous reports of him dragging stuff back from the trash bin. We threw out a folding chair with a wonky seat a few months ago, and MB saw Upstairs Neighbor Guy toting it home a few hours later. For the most part, I say more power to him. As I see it, Dumpster Diving is just another way to recycle / reuse stuff. But once he's done with whatever he's scavenged, I don't feel like it's too much to ask that he put it back where he found it.


I did a little Dumpster Diving of my own today, though it was more of a Spot Beside the Dumpster than a Dive. When I got home from work, there was a crib leaning against the fence behind the Dumpster. Someone threw away an entire crib. I was appalled. Granted, it's not the nicest crib in the world, but I'm sure someone would love to have it to fix up for their baby. It seemed like such a disgusting waste to let it get carted off to the landfill, so I ended up dragging it back to my apartment. I'm sure I provided immense amounts of entertainment to anyone who saw my scrawny out-of-shape ass hauling that damn baby bed down half a city block. My dad's going to come by with his pickup on Saturday so we can send the crib to Goodwill.


MB was out having dinner with our good friend / Evilducky's husband, The Englishman, so I called to warn him before he had a chance to come home and discover the crib on his own:

VBG:  "Hey, honey? I just wanted to let you know that there's going to be a folded-up crib in the living room when you get home, so don't freak out."

VBG:  "Sure. You'll have some time to practice." 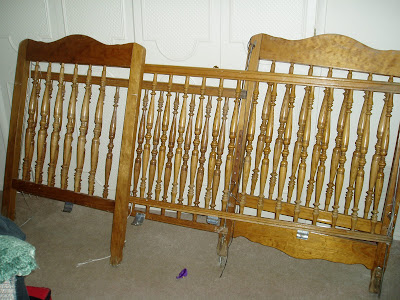 Posted by velocibadgergirl at 11:58 PM