I'm jumping on Brown Eyed Girl's bandwagon and joining the 5 Minutes for Mom Blog Party. You don't have to be a mom to participate, and when I did NaBloPoMo I discovered lots of cool blogs, so I figure this might be fun, too.

The idea is to post an entry telling about / introducing yourself and your blog, invite all your friends to come to the party as well, throw the spiffy retro icon in your sidebar for the week, and then add your blog address to the list over at 5 Minutes for Mom.

I realized a while back that I kind of just jumped into the blog thing, assuming that the only people who'd ever read it were friends from "real life." Now that I actually get some traffic from people who haven't known me for years, I figure it behooves me somewhat to do some kind of introduction. A party seems like the perfect place, so let's get to it.


Velocibadgergirl is my most frequently-used online pseudonym, though not my only one. My real name is not so unusual that people stare and say "really?" when they hear it, but unusual enough that I've never actually met anyone with the same first name as me. I was named for my dad, which explains the somewhat odd spelling of my somewhat uncommon name. The spelling accounts for the fact that about 75% of the population seem incapable of pronouncing my name correctly when they see it written out and have to guess. This baffles me, as it's pretty much spelled like it sounds. My middle name, on the other hand, is vastly common both in spelling and in occurrence, and is actually the same as Danger's middle name. Because my name is somewhat rare, I plan to keep it secret, just to reduce my Googleability. Sorry...that's just how I roll.


I will be 26 next Tuesday, but I was born on a Friday, which is terrifically cool. I am married to MB, my fantastic husband, my bestest of best friends, the love of my life, my soul mate, my true partner, who was born exactly three months to the day before me. We've been married for nearly 3 years, and our wedding took place 4 years to the day after we met. I moved in with him after my junior year in college, when my mom told me "I'd rather you move in with your boyfriend" when she found out that the two girls I was planning to move in with tended to smoke pot. Needless to say I didn't stick around to ask questions, because how often in the history of the Universe has a mother uttered those words? We don't have any children yet, but someday we'd like to have two, and though we really just want happy, healthy kids, secretly (a.k.a. publicly, on the internet) we're really hoping for a boy and a girl. We're already 95% sure we know what we'll name them if we get one of each. As picky and stubborn as we both are, it's probably for the best that we're battling all of the name stuff out ahead of time.


I was in college for 5 years, and earned a BS in geology and a BA in English with a creative writing emphasis. I write fiction, but I almost never call myself a writer. In my experience, the more eager someone is to proclaim that he or she is a writer, the less likely it is that the person doing the claiming is actually any good at it. Just because you can competently string together sentences doesn't really mean you should go around telling people you're a writer...to me that term refers to someone who is pretty good at it, and probably recognized as such by someone other than themselves, their friends, and their family members. I've never been published, so I don't really count myself as a real writer, though I really wish I could be one. You will probably never, ever see any of my fiction posted here, because I'm pretty shy about it. If you know me in real life or I've known you online for a while, I might be willing to let you read something, but no promises.


I love love love to read. I read all the time, and I'll read almost anything. I'm not too much for mysteries or romance, or space-based sci-fi, but other than that, I'm probably game. In the last seven days, I've been to the library at least three times. I tend to head there anytime I get an itch to learn about something. Last week I went to get books about Ice Age megafauna. Then I went back the next day to get books about light and color for a lesson plan I'm writing for work. I went today and picked up some books about forests and conservation. I usually take a book with me everywhere I go, because I hate sitting and being bored with a fiery passion. I haaaate it. If there's nothing to do and I don't have a book, I'll read anything I can find, even the backs of packages. I'm insatiable.


I talk A LOT. If you get annoyed by people who talk a lot or talk fast, we could never be in-person friends. I also swear more than a lady should, so if you're offended by profanity, this is definitely not the blog for you. I am extremely open-minded, passionate about environmental issues, and very liberal, and while I try to keep my politics to myself, there are a few hot-button issues that I can get spun up about really, really easily. I try to respect everyone's opinions and political views, and I expect the same respect in return.


I grew up Catholic, went to a K-8 Catholic school (followed by public high school), and married MB at the Catholic church that I went to throughout my childhood and that my parents still attend. I haven't been to Mass since Christmas, and before that I hadn't been since Easter, and I won't go again until this Easter. I went every Sunday during Lent last year, but whatever I was looking for, I didn't exactly find it. I'm not sure what I believe or what label fits me. I'm not terribly religious, but I have some beliefs and some ideas, and at times I feel pretty spiritual. You probably won't see too much religion on the blog. Please do not use this as an opportunity to witness to me or try to convince me to get saved.


I have a job that rocks, to the point where some days it is almost physically painful to not write about it. However, I don't feel like it would be responsible to write about my job on the blog, so I try to keep it off limits. In vague terms, I am a non-traditional educator, teaching science to kids in non-classroom settings on an almost daily basis. Sometimes I do that directly, and sometimes I do it indirectly through programming and planning. I can't really say much more than that, which sucks because I LOVE my job. There are days when I feel like I was born to do what I'm doing, like everything I did in my life prior to landing this job was just preparation for this job. It's exhilarating and wonderful and I am so very thankful. I also feel like a bit of a jackass whenever any of my friends go through hard times at jobs that don't quite fit, or end up hating what they do. But I'd rather be a jackass than give up my work, that's for sure.


I am a massive, massive nerd. I love to learn. If you gave me a choice between lying on a beach for a week, drinking mojitos and taking in the sun on a tropical island paradise or spending a week taking an educational workshop about the ocean, I'd choose the workshop without a moment of hesitation. I'm in an eight-week master naturalist program right now, and it's killing me that the class is more than halfway over. I'd be pretty stoked if we could just keep attending Monday night classes for the rest of the year.


I have one sister, and both of us are (happily) adopted. (More on that here if you're interested. Be warned: it's a bit ranty.) My parents fostered dozens and dozens of children while I was growing up, starting when I was four and continuing until halfway through my sophomore year in high school. When I see movies and TV shows that depict stereotypically evil or careless foster parents, it hurts my feelings a bit, because my parents were always loving and caring and giving, and our foster siblings were always treated the same as we were, even though we were the "real" kids of the family.


MB and I have one cat, and I talk about him way too much. He's quite photogenic, way too clever for his own good, and quite possibly the fluffiest feline on the entire planet. I love him more than a girl should love a cat, most of the time. He's as rotten as the day is long, but I wouldn't trade him for anything. 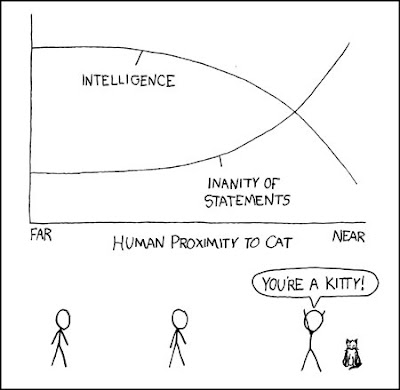 from xkcd, my new favorite webcomic

And, as a last fact about me, I am an Olympic-caliber thrift store shopper. I am a complete bargain whore, and I have really good luck finding kickass stuff, most of the time. Five of my favorite shirts to wear to work were purchases at local Goodwill and Salvation Army stores: 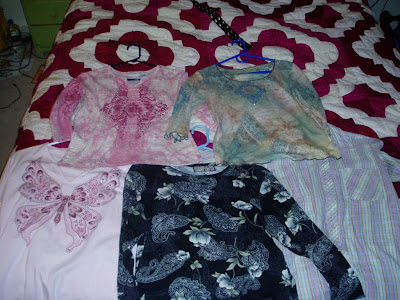 The winter coat I've worn every year since 2003 was purchased at a Salvation Army in Stratford, Ontario, for 2.50 USD. I once bought a faux-sheepskin-lined reddish brown leather coat for $1.90 at one of the Salvation Army stores in my hometown. The dresser that I have in my bedroom right now was purchased at my favorite Goodwill store. I also love me some clearance rack goodness.


OK, that is definitely, definitely enough about me. Now it's your turn to join the party, if you're interested! I made brownies and there's gouda, and I've got some CDs on shuffle, and we can totally play Munchkin all night! (Also, there's now three expansions for the original that I don't have! Woe! Rending of garments!)

Posted by velocibadgergirl at 11:09 PM

Email ThisBlogThis!Share to TwitterShare to FacebookShare to Pinterest
Labels: 42