Since I only get one weekend off work each month, MB and I are somewhat restricted as far as when we can plan to do stuff together. Since my birthday is coming up, MB designated this weekend as my "birthday weekend," and told me that he wanted to take me somewhere cool, somewhere I wanted to go. I wanted to go here, but it's a pretty long drive and we didn't really feel like spending money to stay one night in a hotel. Besides, according to weather.com, it was going to rain all day on Saturday, so we changed our plans. I'm still a little annoyed with weather.com for lying to me, because it was absolutely beautiful outside yesterday and today, with nary a rain cloud in sight. All in all, though, it was a really fantastic weekend, so I guess I can't complain too much.

Yesterday, we went on a bit of a road trip and visited Squire Boone Caverns, since caves are perfect places to spend the kind of rainy day we were supposed to have. I wish I'd taken notes during the tour, because I can't remember anything about the age of the cave or of the formations inside. It was very cool, though--one of the fanciest caves we've seen together. There were lots and lots of cave formations, and the guide actually got everything right. Usually, cave guides ask at the beginning of a tour if there are any geologists present. I never raise my hand, but MB always rats me out. Then I'm too polite to correct them when they impart incorrect information, like saying that the speleothems are made of onyx (They're not. Onyx is quartz, SiO2. Cave formations are made of calcite, CaCO3. Please show me one piece of limestone that dissolves to make quartz.). Anyway, our guide was right on with all the science, and she was fun.

The cave was supposedly discovered by the famous Daniel Boone and his brother, Squire Boone, Jr. According the to story, they went in through the natural entrance, scaled a series of three waterfalls (two eight-footers and a twelve-footer), and did some exploring in the lower level of the cave. No one knows how far into the cave they actually went, but according to our guide, most people don't think they went very far into the passageways, since they had only torches to rely on for light. Some people doubt that they actually made it up the waterfalls in the first place. It's a cool story, however it actually played out. Here's the top waterfall, the twelve-footer: 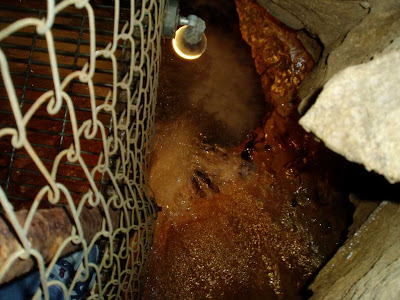 I believe the guide said about a million gallons pours over it in an average day.

Caves are crazy-cool places, and I feel really lucky to live near one of the biggest karst belts in the United States. 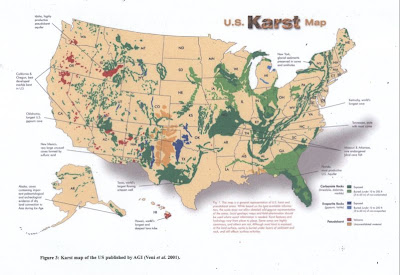 I could go on for quite some time about how awesome caves are and about the unique ecosystems they support, but I think pictures would be more fun, so here are some we took during the tour: 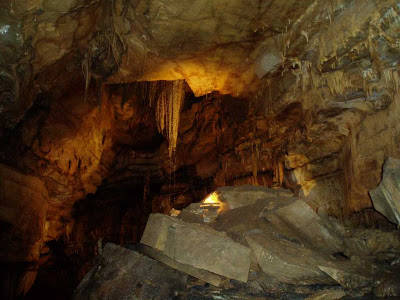 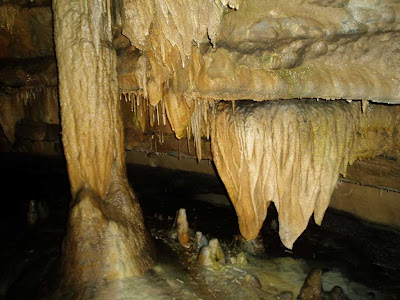 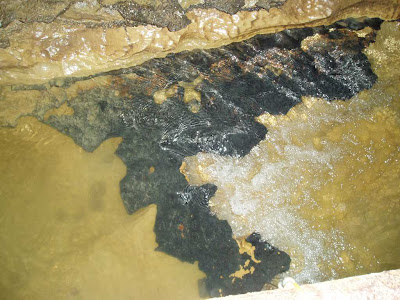 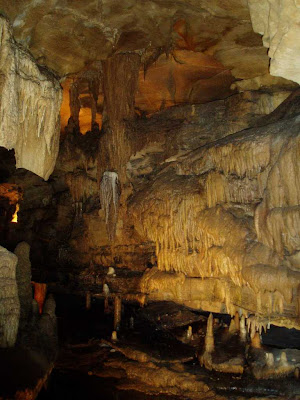 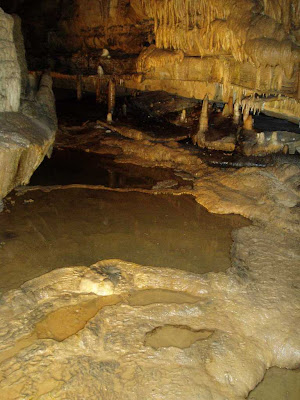 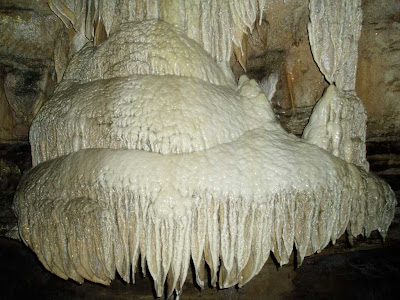 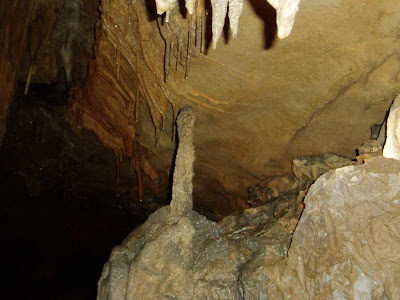 MB dubbed this the "cave penis" 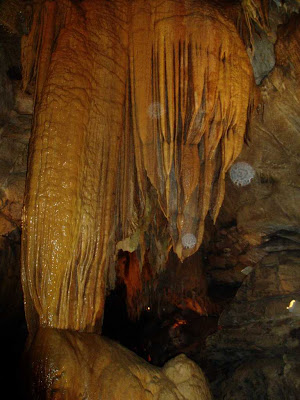 This is the Rock of Ages, the largest and oldest formation in the cave. 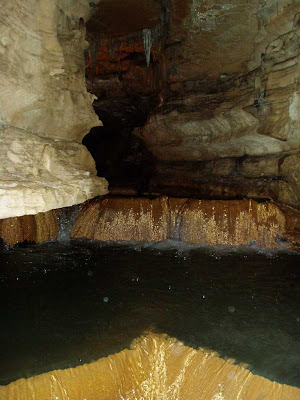 According to our guide, these are the largest active (still growing) rimstone dams in the world. 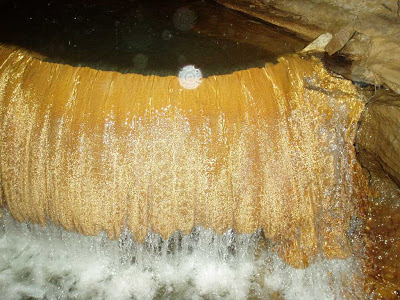 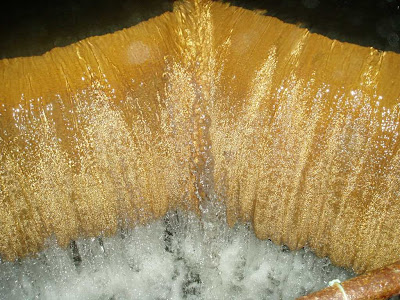 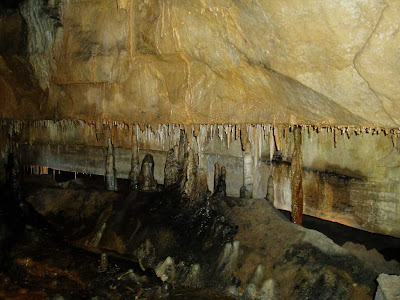 MB called this "upside-down New York City."
At the lowest point in the cave, we were 9 stories underground. You could stand on the hill over the top of the cave and have no clue what was beneath your feet. It's mindblowing and awesome to think of all the wonder that could be hiding just out of sight. For more pictures from the cave trip, check out Shutterfly.


Today, we slept very late, which was fabulous, and then went hiking at a state park not too far from where we live: 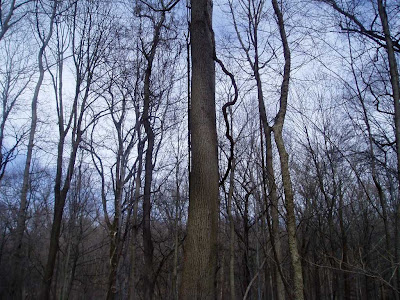 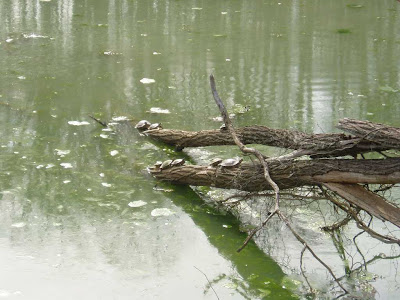 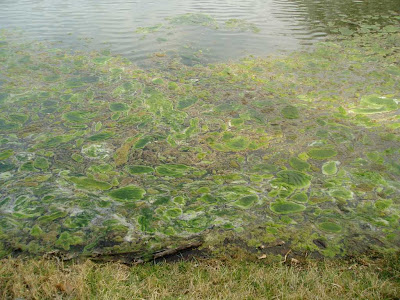 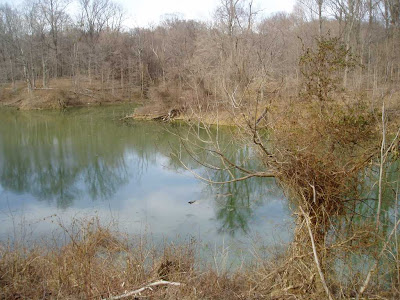 After hiking, we went out to run a few errands, and MB bought me a two-in-one novel of Eric Garcia's Anonymous Rex and Casual Rex. My sister also gave me Terry Pratchett's Night Watch and Sergei Lukyanenko's Day Watch, so it's been a satisfactorily bookish birthday. 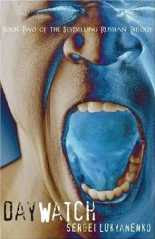 Let's end with some minutiae:

Top Design turned out crappy enough. Now you're trying to get us swallow your new filler show, Shear Genius, a hairstylists' competition? You've got to be kidding. Please just give it a rest until you're ready to start the next season of Project Runway.

I know my addiction to America's Next Top Model is shameful, but I'd still appreciate it if you'd show it when you say you're going to show it. Otherwise, how am I supposed to be able to tape it while I'm out on Wednesday nights?

What I've been doing with my evenings lately:


Posted by velocibadgergirl at 11:17 PM