Brown Eyed Girl rocks the partay, rocks the partay. Why? Because she sent me a package in the mail. And inside I found two packages of Dots. Best of all, stuck to the Dots was a note that said, "Now the next time you get a taste for them, MB won't have to run to 10 places." Brown-Eyed Girl, you kick ass. Not only did the note make me laugh and laugh, but I've had a fierce Dots craving for three days running. Word up, homie. WORD UP.


This made me laugh so hard I almost choked on my Fruity Cheerios, especially during the flailing (thanks to Tamsyn for the original link):


And now, for more clutter busting!

I'm slowly (so slowly) working my way through the piles of clutter we've accumulated over the last few years, working toward the goal of a more simplified, less stuff-clogged living space and life. Last week, I spent an evening going through old clothes and pulling out stuff that no longer fits or that I just don't wear / like. I gave my sister two huge shopping bags full of stuff, and I still have a carryon suitcase full of things that have to go. Inspired by Fussy, once again, I decided to take some photos to memorialize things that I have fond feelings toward, but that I probably won't ever wear again, so I'll be able to get rid of them without losing the memories. 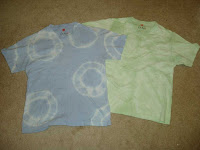 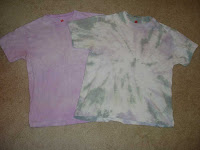 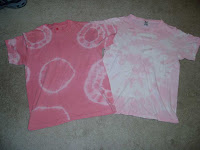 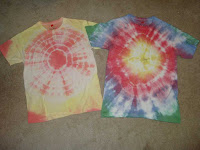 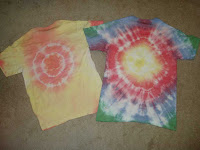 From April - November 2004, I worked at a state historic site where my boss was somewhat lenient about the dress code. We had four weeks of day camp that summer, and each week we tie-dyed shirts with the kids. Each week, I made a few shirts, and they more or less became my uniform for the rest of the season. They're a bit too small for the boobage these days, and my dress code is a little more strict anyway, so I've pulled them out of the closet. Even after photographing them, I couldn't bear to part with them, so I bent the rules a little and put them into a box with a few other things that are too cool to get rid of, just in case I have a rad kid someday who wants to wear them. Besides, the two in the last set of pictures are probably the best tie-dyed shirts I've ever made, and the rainbow one hasn't even been washed yet! Click each picture to get a better look at the patterns. You'll note that I managed to totally dodge the too-oft-occurring tragedy of tie-dye circles in the tata region, which is always embarrassing for a girl. I was quite, quite careful with my rubberband placement. Huzzah!

Then, another pair of beloved but battered size 9 hiphugger jeans: 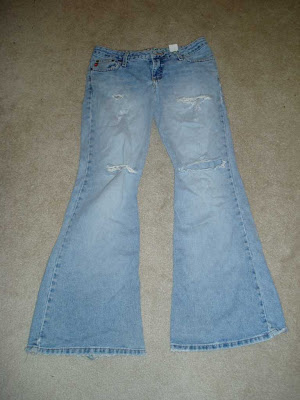 Since these are only torn a little at the knees and at the bottoms of the hip pockets, I'll probably toss them in the Goodwill box. My mom would be horrified, but my sister's boyfriend's brother just spent $200 on a pair of pre-ripped designer jeans, so I figure someone might get some use out of these. Lord knows my ass will never fit into them again. 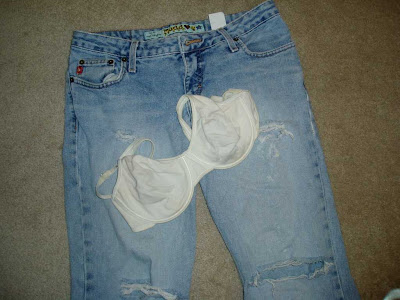 I can't believe my boobs ever fit into this comparatively wee bra (comparative to now, anyway). And, the funniest boob / bra post EVER EVER EVER:  A Potted History of My Tits by Antonia of Whoopee. Not really safe for work, but so very funny.


I'm not particularly sentimental about these, but they are pretty: 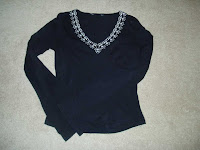 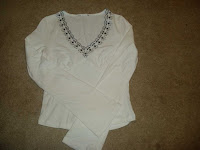 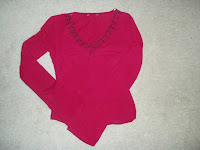 They never quite fit properly, because the sleeves are sort of skinny, and I've never had small upper arms. Back in the day, they were somewhat muscular from all the Taekwondo badassery, and now they're just sort of thick. It's an all-too-common trend in girls' clothes in general, I think--the tendency to forget that some girls do actually have muscles. Too bad, because the shirts are cute.


Of all the shirts, I think I'm most wistful about this one: 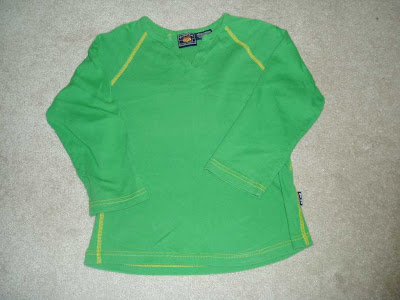 Love the cut, love the color. It's a 3/4 sleeve shirt, which sort of makes it look--in this photo, anyway--like it's made for T-Rex arms. (I'm trying to pass the potatoes!) That just intensifies my affection. Alas, it's too short now.

Is it wrong to drool over a boy who weighs less than my right leg? 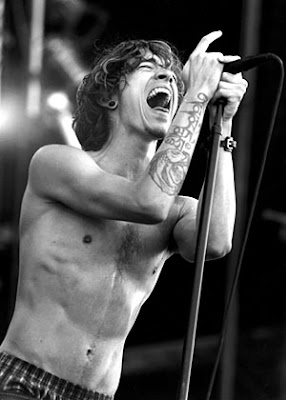 
Is it legal to be this sexy whilst singing?


Posted by velocibadgergirl at 11:53 PM