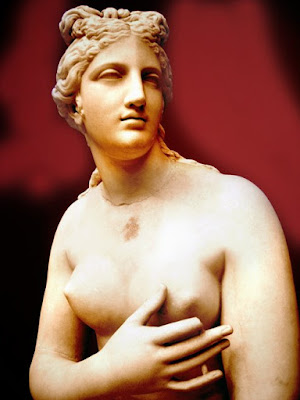 Girlfriend has a hot date with this guy: 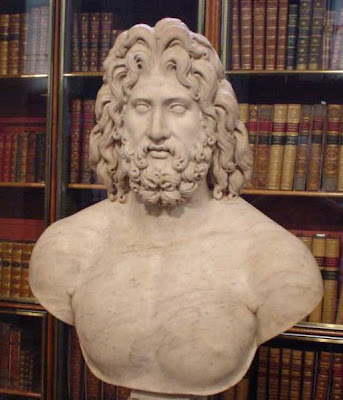 "Hey, Zeus! We all just decided your hair is super attractive! Hooray for you!"

As everyone knows, Venus is the goddess of love, beauty, and fertility.

"Shit. Where'd I put my clothes?
I can't see anything without my contacts."

In the old days, Venus was joined in holy matrimony with the god of the underworld, but these are modern times, and sister is a liberated woman these days.

"Does this drape make my butt look big?"

Well, she's getting there. Anyhoodle, Venus is on her way to meet this handsome dude, who also happens to be head honcho and king of the gods: 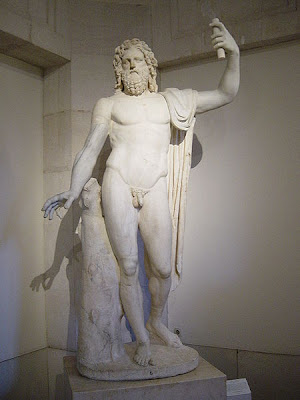 "Who needs clothes? My hair looks damn good.
Throw a little Aquanet on there, and I'm good to go."

Even the deities are getting caught up in the reality dating craze, and we all get to watch. As the sun sets each night between now and November 30, look to the south / southwest and watch for Jupiter. It'll look like a freaky bright yellow-orange star, pretty low in the sky. Keep your eye on Jupiter, and you'll see Venus sashaying toward him from the lower right. True to her "goddess of beauty" title, she's a beautiful bright white star-like object, and is actually the second-brightest natural object you'll ever see in the night sky, after the Moon.

If you want to be scientific about it, what you see when you look up into the evening sky is sunlight reflecting off of Jupiter, the largest planet in the Solar System, and Venus, the hottest planet. 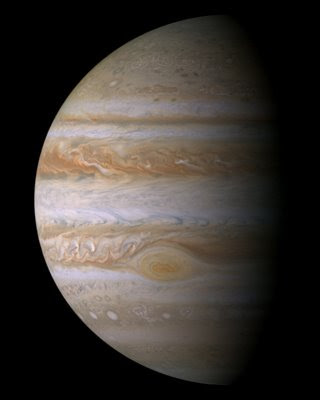 As we all know from science class, Jupiter is a gas giant with no solid surface. It's so large that if it was hollow like an Easter egg, we could fit nearly 1000 full Earths inside. It has 63 moons that we know about, and a storm on the side twice the size of our entire planet. Pretty wicked. 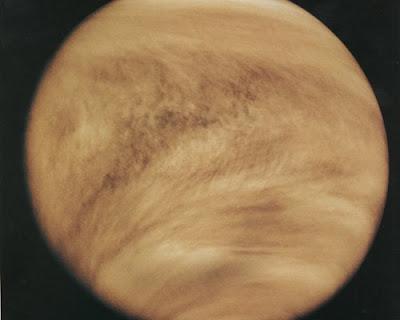 Venus is a terrestrial planet like Earth, and the two are nearly the same size. The ridiculous amount of clouds account for a monster greenhouse effect, which keeps the surface at a blistering 860+ degrees Fahrenheit. Oh, and they also rain sulfuric acid down onto the surface. Very romantic!

On November 30 and December 1, the two lovebirds will meet up in conjunction, and will be only an apparent finger-width apart near the Moon in the evening sky. After that, Venus will pass Jupiter and wander off, getting a little higher in the sky each night. It's definitely a rare spectacle, not to be repeated until 2012. I know I'll definitely be checking it out. 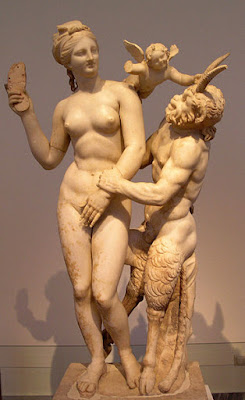 "Back the fuck off, goat boy. I've got a date.
Don't make me smack you with my handbag."


*ancient Hawaiian name for the planets. It means "wandering stars."

Posted by velocibadgergirl at 10:23 PM