In which I let my geek flag fly

I've written a few times before about cool things to see in the sky, and last night I was appreciating a good view of Orion on my way home and thought of another cool thing to talk about. Or at least cool to geeks like me.

Here's Orion, hunter and wearer of a very snazzy skirt: 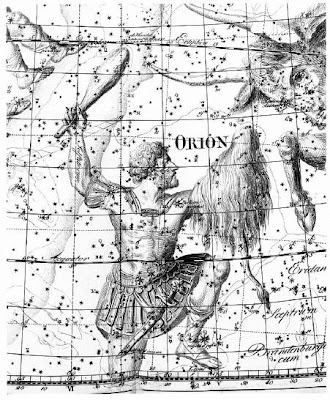 This is what he looks like in stars alone, clearly showing the three stars of his fancy belt: The stars you want to take special notice of are the upper left (the orange one) and the lower right (the big blue one). The blue one is Rigel, a supergiant about twice as hot as the sun and 70 times larger. That seems impressive until you consider the orange guy. That one is called Betelgeuse, which I have heard variously pronounced as Beetlejuice, Baytel-gyse, and Baytel-joose. According to this article, the star's name means "hand of the central one," but I read somewhere that it means "armpit of the giant," and if that doesn't make you laugh like a 12-year-old boy, you're living life way too seriously.

Betelgeuse is a red supergiant, the largest type of star known to exist. How large? Well...let's do some analogizing. 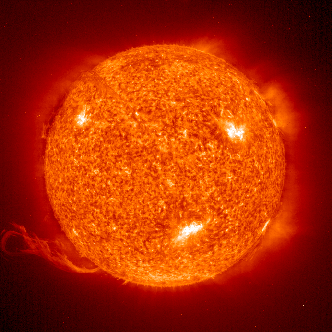 Here's the orbit of the Earth around the Sun:

As we all know, it takes the Earth an entire year to travel one loop around the Sun. But here's something you may not know:  the Earth is going 67 THOUSAND miles per hour. And it still takes us a year to make a lap. Craaazy.

And this will really bake your noodle:  take the Sun, 865000 miles across, and the Earth, taking an entire year to go a loop at 67000 miles per hour. All of it -- the Sun, the Earth, and the Earth's orbit around the Sun -- could fit inside Betelgeuse.

Next time you're outside and spot Orion, give that orange star a second look, because dude...he's kind of a really big deal:


Posted by velocibadgergirl at 10:16 PM